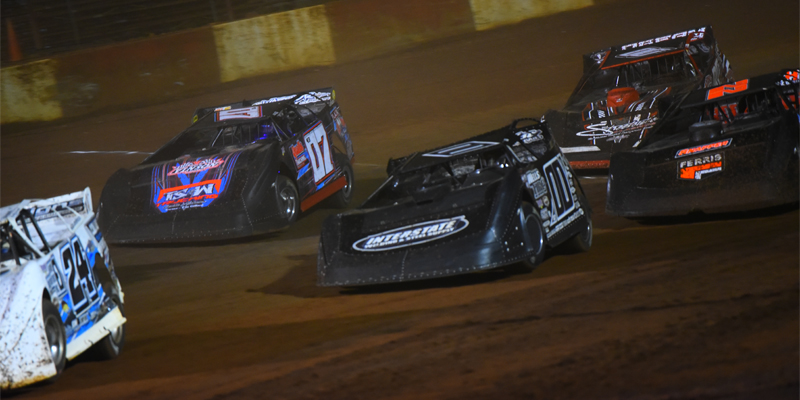 This weekend, the ULTIMATE Super Late Model Series and FASTRAK Racing Series wrap up their 2019 seasons at Screven Motorsports Complex with the 20th Annual Georgia State Outlaw Championship on November 22-23.  D.J. Irvine, General Manager of FASTRAK Companies International, discussed that and more when he joined Speed51’s “The Morning Bullring” on Monday.

This weekend’s card features the ULTIMATE finale on Friday, along with two nights of racing for the FASTRAK Pro Late Model competitors.  Irvine believes it will be an action-packed weekend of exciting racing to close out the year.

“I am terribly excited to get down there,” Irvine said.  “I love going down there.  The last three years, we’ve capped off both the ULTIMATE and the FASTRAK season down there at Screven.  We really appreciate Red having us down there for this event.  It’s always a lot of fun and great racing down there.  Corey Almond and Travis Pennington put on an absolute show there last year.  Right now, it’s looking like it will also be some warmer weather, too.”

While the racing will be exciting, the championship battles are all but decided for both tours.  Zack Mitchell will claim his second consecutive ULTIMATE Super Late Model Series title, while Carson Ferguson will be honored as FASTRAK Racing Series champion after a strong season in his first full-time shot at the tour.

“It looks like Zack Mitchell is going to lock up his second straight ULTIMATE Super Late Model Series championship.  He has been a great representative of ULTIMATE, a great person to represent us as champion.

“Carson Ferguson with the FASTRAK Racing Series has had a tremendous season.  Only finished out of the top-10 three times, I think, this year. He’s also going to be our rookie of the year.  It’s been great having that young man racing FASTRAK every week.  He’s going to be a great representative for FASTRAK as his career continues to develop.”

While those two seasons will end this weekend, the ULTIMATE banner is looking forward to kicking off another series, as the ULTIMATE Deep South Super Late Model Series will contest its first-ever event on Sunday, November 29.

The series’ first race will be at Boothill Speedway (LA), using Topless Super Late Models in conjunction with another event in the area that weekend.

“Looking forward to getting to Boothill Speedway in Greenwood, Louisiana.  It’ll be a $3,000-to-win race for our first race in the ULTIMATE Deep South Series.  That race will actually be ran topless.  Comp Cams has a topless race about 60 miles down the road on Saturday, so it makes sense for the whole weekend to be topless.”

While there are still a few events left on the 2019 schedule for FASTRAK Companies International, they are already looking forward to 2020.  For their touring series, their big-money races return for another year with the possibility of more $10,000-to-win races on the horizon.

FASTRAK also sanctions weekly Pro Late Model racing around the country, and has already received positive feedback on a big announcement from earlier in the fall when they pledged a $30,000 National Weekly Championship payout if 20 tracks would commit to the body while averaging 12 car fields.  To further this goal, FASTRAK announced that sanctioning fees would be just $1 for the year in 2020 in hopes of drawing in those 20 tracks.

“I’ve been seeing some of the tracks we already have and talking to some new tracks about some possibilities.  It’s a lot of exciting things going on.  The response to the $1 thing has been great.  $1 to be weekly sanctioned with FASTRAK to give drivers an opportunity to compete for the VP Racing Fuels National Weekly Championship.

“We publicly committed to paying $30,000 to the FASTRAK National Weekly Champion if 20 tracks come on board and average 12 cars per race.  Somebody, please, make us write that $30,000 check.  We want to.  But it will take all of us coming together, tracks, teams, everybody working on one vision, one goal, driving towards the same path to make that a reality.”

For more information on this weekend’s Georgia State Outlaw Championship, visit www.fastrakracing.comor www.screvenmotorsports.com.  Speed51 will be at the event providing coverage as the Official Video Partner of FASTRAK and ULTIMATE.

Fans who missed Irvine's interview can click here to see an on-demand replay of “The Morning Bullring.”  The show traditionally airs at 7 a.m. ET on Speed51 and Speed51’s Facebook Feed presented by Five Star Race Car Bodies, but will take a Thanksgiving break next week, returning for an on-location episode at Five Flags Speedway (FL) on Monday, December 2 in the build-up to the Snowball Derby.  Stay tuned for more details of that episode.