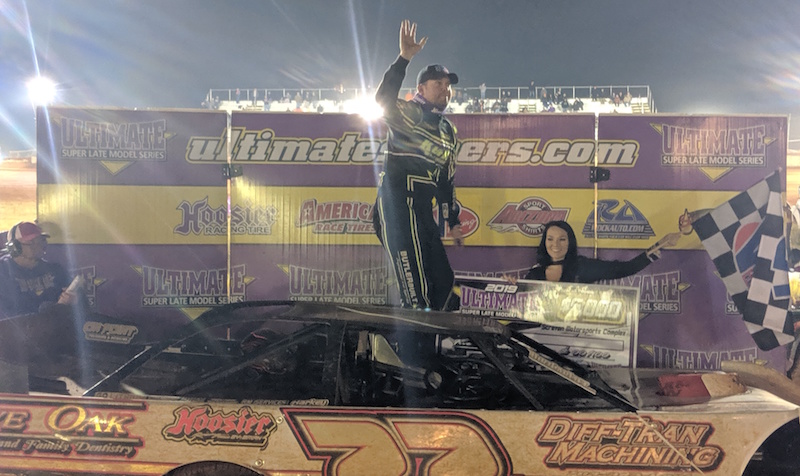 The ULTIMATE Southeast Super Late Models rolled into Screven Motorsports Complex (GA) Friday night with 20 drivers in tow. Names like Mitchell, Brown and Overton hit the Georgia clay one last time in the ULTIMATE Southeast season finale. At the end of the night, it was Mt. Holly, North Carolina’s Chris Ferguson who ended up in victory lane after taking the lead from Zack Mitchell in controversial fashion on lap 35 and never looking back.

“Yeah, we threw a couple sliders,” Ferguson admitted in Victory Lane. “Threw a couple clean ones. That last one was a little questionable, but you know I haven’t won since May, and I really wanted to win tonight. He had the best car. He got into the fence and let me get to him, but we were just a bit better going into the center and he was better coming off. You know these sliders had the fans all excited there for a little while and that last one he got held up, so I just drove in as hard as I could. I wanted to make sure I cleared him, but I had to drive in way farther than I thought I was going to, and if I had been able to stay in the throttle I thought I would have been out of the park. But, you know, hats off to them, congratulations, they had the best car. They have been fast with that car ever since they unloaded it. So I just have to thank my crew. They worked their butts off, and thanks to all the fans who came out tonight, and I thank the good lord for giving us another win before the season ended.”

While Zack Mitchell was on the receiving end of Ferguson’s slider, he admitted he wouldn’t have been in that situation if he hadn’t have hit the wall a lap prior.

“We had a fast race car all weekend,” Mitchell said. “We’ve had a fast race car the past ten races. I screwed up. I got into the wall. But what do you say, I don’t know. What goes around comes around. I mean, when I drive across his nose Sunday I don’t want to hear nothing. But Chris, he’s a good, hard, clean racer. I probably know he didn’t mean to do it. But he needs to realize when the roles are reversed, I don’t want to hear no crying and no boohooing.”

Jeff Smith finished third on the night after methodically picking his way through the field.

“Yeah, the track was good, as far as racing tonight,” Smith said. “The top was there, the bottom was there and I got to watching that middle. It got dirty. It looked like it got stuff laying there like it might have some traction in it. I got started running that middle and that’s how I got to GR (Smith) and Cla (Knight).”

ULTIMATE Super Late Model fans can watch video highlights, recaps and more from Friday’s feature at Screven on the Speed51 Network by clicking here. Fans that aren’t members of the Speed51 Network can join today for $7.99 a month or $79.99 for a year.