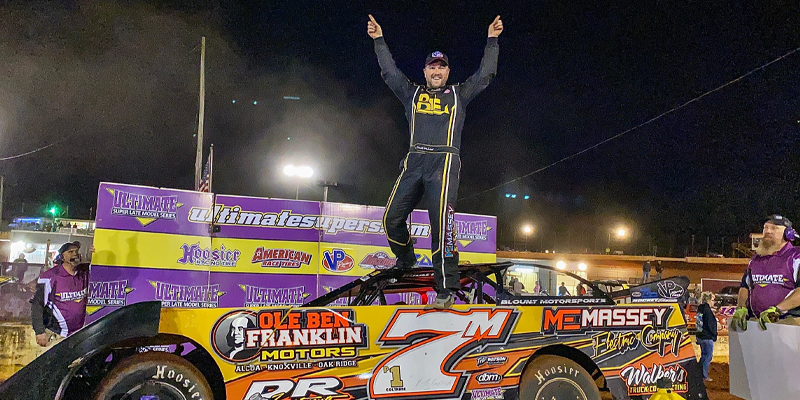 Donald McIntosh quickly jumped to the front in the ULTIMATE Super Late Model Series season opener at North Georgia Speedway, nearly leading the 40-lap feature in its entirety for his first win in the series since 2016.

The win was an emotional one for McIntosh, as he dedicated it to the man who helped him get started in Dirt Late Model racing in 2010.

“I have to dedicate this race to Phil Coltrane," McIntosh told Speed51.  "He got me my start in dirt racing and he is in the hospital right now and I have my prayers with him and his family.”

In the opening laps of the race, McIntosh battled fiercely with pole-sitter Cory Hedgecock.  McIntosh ultimately came away with the top spot and would hold off several challenges on restarts.

“We had a really good car and I think clean air helped us being out front," said McIntosh.  "I knew being aggressive at the start was gong to be important or otherwise it would be hard to get around Cory (Hedgecock).

"I can’t thank him enough for racing me clean, I might’ve turned down on him a little bit but to be honest with you.  I did not know he was there until we touched, but overall good racing tonight.”

Hedgecock set a new track record on his way to his fast time qualifying effort, with a time of 12.174 seconds.  Once McIntosh got around him for the lead, he could not get enough clean track to retake it.

“Clean air and the track just gets dirty, the more cars get in front of you just blowing across the whole time.  I got to run him down into turn 1 and 2, but he took my line away, which is all good.  It's what he is supposed to do, just wish we would’ve caught him a little bit faster."

Zack Mitchell put on a show, as he was one of the first drivers to jump to the top of the track and carry momentum to a second-place finish after starting fifth.  It was Mitchell's first trip to North Georgia in his new Barry Wright Race Car, and he was very pleased with the performance at a venue that typically gives him struggles.

“We were really excited about bringing this car down here," said Mitchell.  "We’ve never really been the best in the world down here.  Hot laps, we were way off, but we fined tuned and this thing a little bit and then bent a nose rack in qualifying and had to borrow one for the race.

"We had a good car in the feature.  I felt like Cory was a little bit better there at the end.  We were bad fast when the track was hammer down and run wide open."

The ULTIMATE Super Late Model Series will be back in action next week, racing at County Line Raceway (NC) on March 21.

Race fans who missed Friday's ULTIMATE season opener can watch highlights of the race now on the Speed51 Network.  Speed51 is the Official Video Home of the ULTIMATE Super Late Model Series.