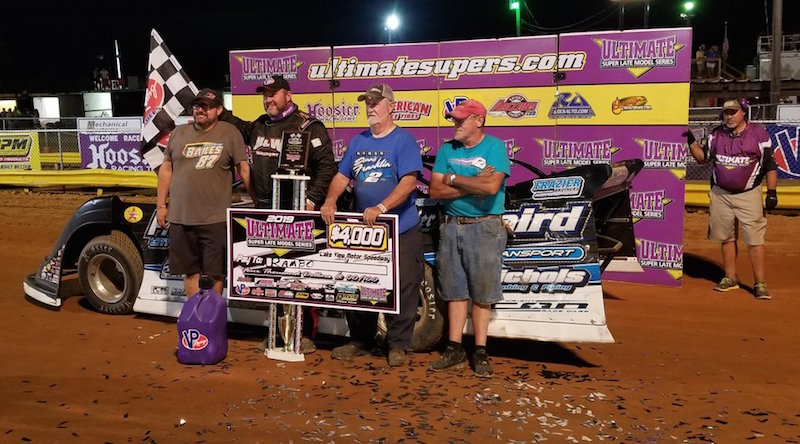 Love at First Sight for Rambo at Lake View

Dennis “Rambo” Franklin had never laid eyes on Lake View Motor Speedway until Saturday afternoon.  At the end of the night, it proved to be a case of love at first sight.

Franklin started from the outside of the front row, took the lead on the opening lap and never looked back on his way to winning the first ever ULTIMATE Super Late Model Series race at the Nichols, South Carolina oval.

“It does (feel good).  This race car has been at Barry Wight’s all week.  Lance has worked on it all week long trying to figure out what’s wrong with it, and it really showed tonight,” Franklin said in Victory Lane.  “It just felt phenomenal to drive this thing.  It’s been a long time coming, and I’m just glad to finally get it behind us.”

After taking the lead at the drop of the green flag, Franklin needed to fend off polesitter Trent Ivey throughout the race, including for a final time on a restart with three laps remaining.

“We’re gonna get her dialed in.  Lance just got on me telling me I drove it a little bit in the wall there, but when you get out front you just try to stay straight and smooth,” Franklin stated.  “I was just trying to do the best I could to put on a race for the fans.”

Ivey set fast time in qualifying earlier in the evening and appeared to be just as fast as Franklin, but he could never find what he needed to put his No. 88 at the front of the field.

“We had a good car.  We had a really good car but Rambo had a good car, too.  He got out front like he needed to and run the race,” Ivey said.  “Heck, second is fine.  It’s been great.  I can’t thank my mom and dad and all my sponsors who help enough.  I’m just fortunate to be here, it was a good night for us.”

A total of 34 ULTIMATE Super Late Models attempted to qualify for Saturday’s race, with 26 of those cars starting the 40-lap main event.  With a strong field of cars and a jam-packed crowd filling the grandstands, it was a show that everyone in attendance was pleased with.

“I appreciate everyone for coming out,” Franklin said while celebrating his win.  “This is the first time I’ve ever seen this place.  It’s a nice facility; I hope to come back.”

A full on-demand video replay of the ULTIMATE race at Lake View Motor Speedway can be viewed now by premium subscribers on the Speed51 Network.