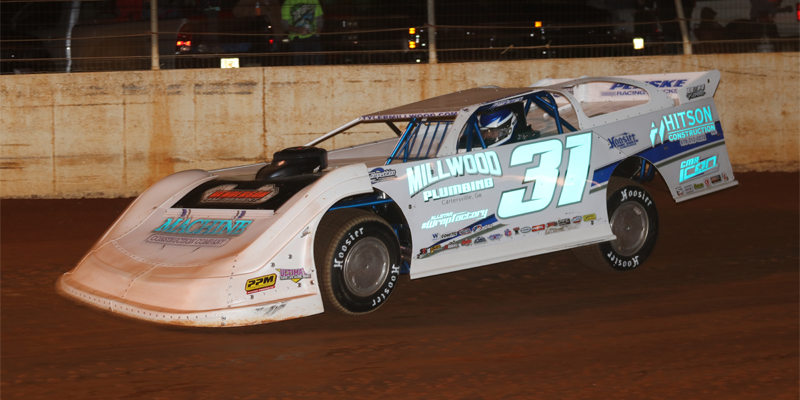 After a season of playing the role of "outlaw" at well-paying Dirt Late Model races across the Southeast, Georgia driver Tyler Millwood is set to return to familiar territory in 2020, as he plans to compete full-time with the ULTIMATE Super Late Model Series. Millwood left his mark on the series by winning ULTIMATE title in his first full season in 2017, and now he’s getting prepped and ready to chase title number two.

After running the DIRTcar Nationals down at Volusia Raceway Park in Florida just a few weeks ago, Millwood feels primed and ready to go for 2020. Although the results didn't reflect these sentiments, Millwood was adamant in his confidence when he spoke to Speed51 on "The Bullring" talk show Monday morning.

“We just got back from Florida.  We basically went down there to do some testing and figure out these new Rocket cars and see what we needed to do to make them drive the way I needed them to drive," Millwood said.  "We didn’t have the finishes we wanted, but we had some good nights and some strong cars at some points there.”

While getting up to speed with the Rocket Chassis has proved invaluable, so is just getting some laps in competition; something that not all drivers have taken advantage of this winter.

“It’s valuable time there because we’re going to run the ULTIMATE deal again this year. The way I look at it we got laps on everybody we’re going to be racing besides the guys running the Xtreme Series. But, we’ll still have more laps than them, and we’ll get better this year.”

As for his reasons for returning to ULTIMATE Southeast, one of the big reasons has been the large race purses that the series has consistently paid out these past couple years.

“It’s the best paying regional series around, other than running a national tour.  You can’t pay 20-grand for a points deal anywhere else. It’s the best series around to run. It just gets your name out there a little better when you got their championship behind you.”

Speaking of money and titles, Millwood is also looking forward to going for a big season points check at year’s end -- something you don’t get to enjoy when you bounce around from tour to tour, like he did in 2019.

“When just bounce around chasing money at these different races, you’re not getting anything at the end of the year," he said.  "Even if you get second, second pays pretty good, I think it’s $10,000. But, we’re looking to win, and winning a 20-grand check at the end of the year is a great way to end it.”

As for his chances at the $20,000 champion’s share, he is liking his chances now that he has plenty of Super Late Model experience at all of the tracks on the schedule, compared to when he started out.

“The first time we ran, I was new to every track we went to. Now that I got some time at all of those tracks, we didn’t have a lot of bad runs then, but now that we got some seat time at all of these tracks we can hopefully pull out some more W’s.”

Although Millwood is looking forward to running some of the higher paying races throughout the 2020 ULTIMATE schedule, he’s just looking forward to racing close to home, as well as a unique addition to the schedule at Lake View Motor Speedway in South Carolina on Thursday, September 3.

“The throwback race at Lake View is going to be really cool. I like coming around to all of these home tracks; Dixie, North Georgia where I started. I know these places very well, so I got the upper hand on some of these guys.”