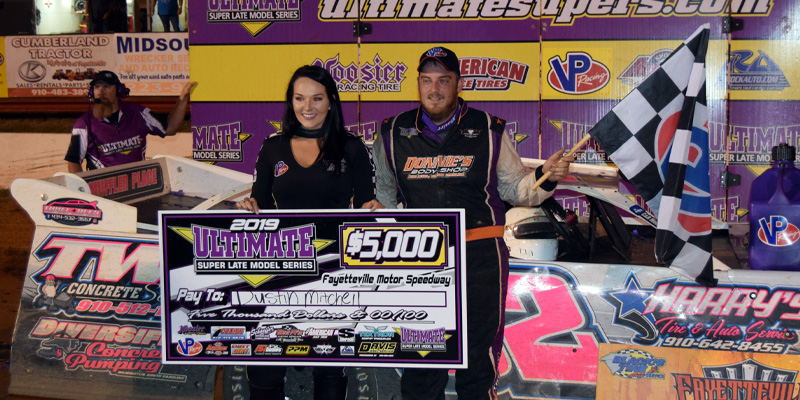 The Pine Level, North Carolina driver completed a daring three-wide pass of pole-sitter Zack Mitchell and Michael Brown to take the top spot on a restart and led the rest of the way to score the $5,000 victory.

The win is Mitchell’s second with the ULTIMATE Supers in 2019, but his first Super Late Model win since re-joining C&R Motorsports in August.

“I got back together with Corky Williams and them a couple of months ago and this is my third win with them, and first in a Super,” Mitchell told Speed51.  “It felt pretty good.”

The win carries extra value at a venue less than an hour from home in a field of 23 ULTIMATE competitors.

“To get one in Fayetteville, in one of these ULTIMATE races, I felt like I had one won last year and gave it away,” said Mitchell.  “I hit the wall down there and knocked myself out of contention for that one.  I’ve always wanted to get a big Super win here at Fayetteville.”

Mitchell’s race-winning move caught many by surprise as he stormed from third to first around the high side of turns three and four, including Mitchell himself.

“I surprised myself there,” he said.  “I saw Zack get a little loose off of two there.   Michael drove up to him and I was committed to the top.  I went in there.  It was either going to win it or come back tenth.”

“Downtown” Michael Brown would also work his way around Zack Mitchell to take the second spot in the event.

“We had a great car,” said Brown.  “The track was a little more racy than I thought it would be.  Dustin made a hell of a move, hats off to him.”

“We had a great race car the first couple of laps,” explained the ULTIMATE points leader.  “We got into lapped traffic and got into one of those cars,  broke some spring stuff and started rubbing a tire.  Not making excuses or anything, but it rubbed the tread off the tire and got real free.  It let them get close to us and he made his move.  He did what he had to do.”

Race fans who missed Friday’s race can view highlights on the Speed51 Network by clicking here.