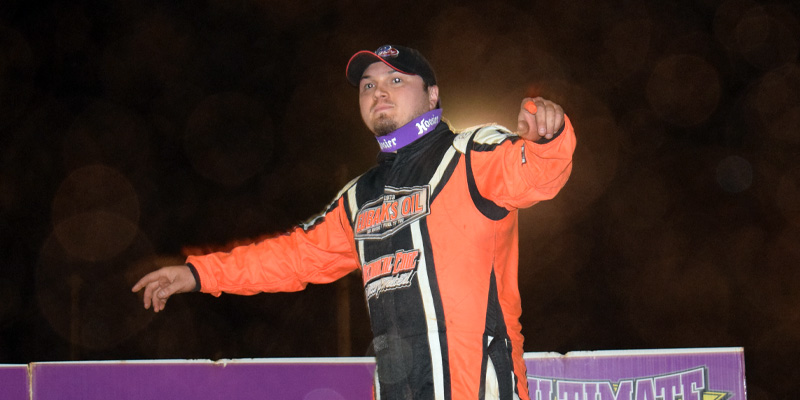 Mitchell, the defending ULTIMATE Southeast Champion, picked up his second win of the 2019 season and added to his points lead, defending the top spot from Bailes over a green-flag run to close out the race.

“Kid Quick” started second in the 41-lap feature to Bailes, who had posted a blistering lap of 14.990 seconds around the 3/8-mile track.  However, Mitchell jumped to the lead on the opening lap and held off a valiant charge from Bailes near the halfway mark to secure the win.

Mitchell was ecstatic to put the new car in victory lane in its first time on the track.

“It means the world,” Mitchell told Speed51.  “This is a brand-new race car.  I can’t thank Lance, Barry, all those guys enough.  We have a phenomenal race car.  I know we didn’t sit on the pole, but I feel like we had one of the faster cars in the Main.  I could put that thing anywhere.”

The race gives Mitchell a boost of confidence entering the second leg of an ULTIMATE doubleheader at Lancaster Speedway (SC), overcoming conditions that typically didn’t play into his favor.

“It really means a lot because we’ve always struggled with a race track like that.  Dusty, dirty, crumby stuff.  I can’t wait for tomorrow [at Lancaster].”

Bailes’ shot at the win came near halfway, with a head of steam on the top line.  However, he was unable to seal the deal with a pass from the outside.

“About half a car-length when I was on top and he was on the bottom,” Bailes remarked.  “Missed it by that much.  Once he moved up top, there was no getting by him.”

“I knew he was up there,” Mitchell said of the battle.  “Tim, my spotter, he told me he was coming on the top.  I made some adjustments with my brakes, run them towards the front a little bit.  I felt a little more comfortable on the bottom, but Tim was holding those sticks pretty close.  I knew I had to do something.”

Bailes was disappointed to come away with second place after leading the field in both hot laps and qualifying earlier in the evening, but took solace as the driver of the Barry Wright ICON House Car that it was another Wright-built machine finishing ahead of him.

“We wanted to win,” said Bailes.  “If somebody else was going to win, I’m glad it was one of Barry’s cars.”

Trent Ivey finished third, rebounding from a seventh-place effort in qualifying to complete the podium.

“I looked like a monkey in qualifying,” joked Ivey.  “If I wouldn’t have buried myself in qualifying, I think I would have had as good a car as [Mitchell and Bailes].  Hey man, first time here in a Super, the year’s going as good as it always has.  We’re just going to keep rolling on this.”

The ULTIMATE Southeast teams move on to Lancaster Speedway Saturday for the second half of a Labor Day Weekend doubleheader.  Stay tuned to Speed51, the Official Video Home of the ULTIMATE Super Late Model Series, for highlights, coverage and updates.